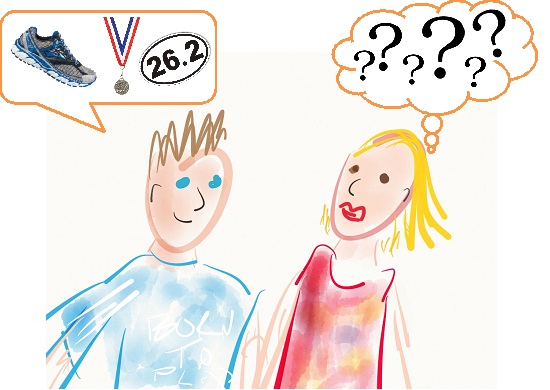 A few weeks ago, to celebrate the Paris Marathon, I posted some of the most commonly used* runners phrases translated into French. Continuing in that linguistic vein, I thought it might be nice to put together some more phrases, this time intended to break down the language barrier between runner and non-runner. So feel free to show this to your long-suffering wife, husband, partner, colleagues, postman, or anyone else you like to bore and bemuse with talk of PBs, Splits and marathon-ness.

1. We say: “It’s a well-known scientific fact that you should change your running shoes after 500 miles to avoid injury”

We mean: “The shoes I like have just been released in a new colour”

2. We say: “I really maxed my lactate threshold during last night’s 5k tempo”

We mean: “I went for a run last night”

3. We say: “I tried for a negative split, but overcooked it early on and now my ITB hates me”

We mean: “I went for a run last night”

We mean: “Okay, you caught me out. I spent the evening in a seedy hotel with a trio of broad-minded Swedish cheerleaders and a large tub of brandy butter”

5. We say: “I think we deserve a holiday. I’ve heard that <insert holiday destination> has some lovely beaches, and Tripadvisor.com described it as one of the most romantic getaways in the world”

6. We say: “The marathon stick and foam roller are both excellent tools for achieving self-myofascial release, and will help prevent injury”

We mean: “I know these things look like giant sex toys. Stop looking at me like that”

7. We say: “This new head torch has a really wide throw and an output of 350 lumens. I need it for my night runs to avoid tree roots, potholes and low-hanging branches”

We mean: “This new head torch has a really wide throw and an output of 350 lumens. I need it for my night runs to avoid tree roots, potholes and low-hanging branches. But mainly I’m just scared of werewolves.”

8. We say: “I realise that an £80 entry fee might sound expensive , but you have to appreciate that it’s famous for being a really technical course while still retaining fantastic PB potential”

We mean: “There’s a race. I heard that last year they had some really nice fudge in the goody bags. I like fudge”

We mean: “I really want you to ask me about this medal I’ve been wearing for the last three days”

3 thoughts on “Lost in translation: a beginners guide in how to speak “runner””